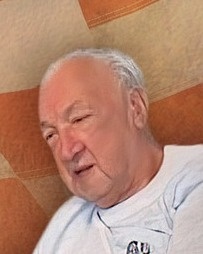 Hand delivered by a local florist

Erwin J. Pawlikowski "H', 87 passed away unexpectedly September 17, 2022. He was a lifelong resident of Mt. PLeasant and the son of the late Andrew and Mary Pawlikowski. He is survived by his adored wife of 64 years Mary Jane Rysz Pawlikowski, son David and wife Sandy Pawlikowski of Mt. Pleasant, Daughter, Janis Hughes and grandson, David Allen Hughes of Virginia Beach.  Additionally, "H" is survived by his brother, Edward Pawlikowski and wife Marcy, a sister Evelyn and husband Donald Pfeifer, sisters in law Mary Jane Pawlikowski and Loretta Gelet; also several nieces and nephews and great nieces and nephews,  He was preceded in death by brothers, Andrew and Eugene Pawlikowski. "H" served in he US Navy aboard the U.S.S. N.K. Perry 883, after receiving his honorable discharge, he was employed by Lenox Crystal Glass and then went on to work at Westinghouse/Powerex for over 40 years, and served as treasurer of the Powerex Federal Credit Union."H" was a member of the Polish Falcons where he was an officer and volunteered as a bingo Caller.  He was also a member of the Mt. Pleasant Fireman's Club, the American Legion Post 446 and the Kosciuszko Club. Erwin was a member of the former Transfiguration Church and current member of St. Pius X Catholic Church where he served as an usher. "H" was known to carry on conversations with everyone and enjoyed a good cocktail.  He enjoyed packing lunches, taking long rides with his wife with a stop at the nearest casino or Bruster's Ice Cream, He was always proud of his outside Christmas Lights and his summer Frog Display.  Visitation for family and friends will be held from 2 to 8pm Wednesday at SALOOM-REGA FUNERAL SERVICE 730 W. MAIN STREET MT. PLEASANT where prayers of transfer will be held at 9:30am Thursday followed by a funeral mass at 10:00 am at St Pius X Catholic Church.  In lieu of flowers, donations may be made to the Animal Friends of Westmoreland County 216 Depot Street Youngwood, PA 15697.   Please visit Erwin's online memorial at www.saloom-rega.com  to sign the condolence guestbook.  Richard Rega, funeral director.

To order memorial trees or send flowers to the family in memory of Erwin J. Pawlikowski, please visit our flower store.
Send a Sympathy Card