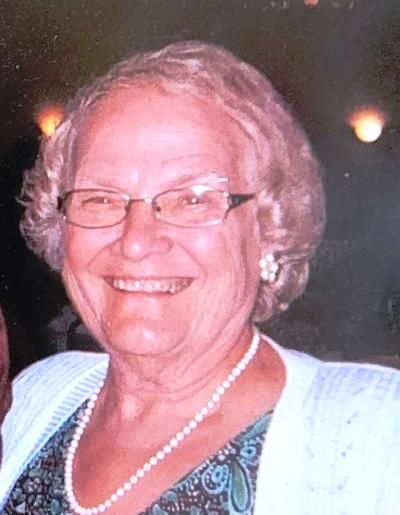 Evelyn Doris Kuhn, 87, passed away peacefully on Nov. 16, 2021. She was born Dec. 29, 1933, a daughter of Mary Elizabeth Blanda King and William Henry King.In addition to her parents, Evelyn was predeceased by her husband, Edward Milton Kuhn Sr., in 2014, just shy of their 60th wedding anniversary. She was also predeceased by her mother- and father-in-law, Kathryn and Milton Kuhn; brothers, William, Carl, Curt, Robert and John King; sisters, Ramona Pasko, Mary Miller and Lillian King; sisters-in-law, Kay Marks, Carol Radebaugh, Martha King, Linda Ann King and Doris King; and brothers-in-law, Donald Shaw, Michael Pasko, Samuel Miller, James Kuhn and Robert Marks. Evelyn was a faithful and devoted member of the Free Methodist Church in Bridgeport, where she taught Sunday School and served as treasurer for many years. Evelyn was also an avid fan, who beamed from the audience, when watching the sports and musical performances of her husband, children and grandchildren. Over the years, she too enjoyed playing softball, bowling, golfing and swimming, always donning her bubble bathing cap. She is survived by her children, Edward Milton Kuhn Jr. and his partner, Jeffery Berry, of Greensburg; Lynn Ann Kuhn of Acme; Lori Lee Kuhn of Mt. Pleasant, and David William Kuhn and his wife, Barbara, of McMurray; and her granddaughters, Synclaire Evelyn Kuhn and Karsyn Marie Kuhn. She is also survived by her sisters, Dorothy Kuhn and Linda King and her partner Richard Bundridge; her brother, Paul King and his wife, Betty; Sister-in-law Patty King; brother-in-law Dennis Radebaugh and numerous nieces and nephews. The family would like to thank the staff at St. Anne's, especially Barb, Lydia, Ramona and Cheri. Visitation for family and friends will be held from 2 to 8PM Sunday and 10 to 11am Monday at SALOOM-REGA FUNERAL SERVICE 730 W. MAIN STREET MT. PLEASANT where services will be held at 11am with Fr. Stephen Honeygosky officiating. Interment will follow in the Mt. Pleasant Cemetery. Please visit Evelyn's online memorial at www.saloom-rega.com to sign the condolence guestbook.
To order memorial trees or send flowers to the family in memory of Evelyn Kuhn, please visit our flower store.